The Christie CP4330-RGB pure laser cinema projector is available and poised to help push cinema forward into the next era of innovation. Much like digital cinema did in the early 2000s, RGB pure laser has opened up an entirely new realm of possibilities. Audiences revel in bright, brilliant and detailed visuals and colors; exhibitors benefit from the low maintenance and lower TCO brought on by RGB laser projection; and filmmakers can create spectacular content that has never before been seen on-screen.

It’s important to understand how much your cinema projector will cost you over the course of its lifetime. By combining the purchase price with the costs associated with changing the light source, this chart gives you an idea of what each illumination platform will cost you over 30,000 hours.

Comparing the costs and benefits of 20K lumen cinema projectors over 30,000 hours

1 Only with extensive yellow notch filtering and color correction which reduces brightness nearly 50%
2 Prices are provided for illustrative purposes only without inclusion of duties, taxes or shipping. For actual pricing please contact a Christie Sales Manager.

The graph below compares brightness drop-off of the different illumination platforms over 30,000 hours (around eight years for a typical cinema projector). Xenon bulbs burn out the quickest, but are also the most affordable to replace. Laser phosphor light modules will last a little more than a year, but need to be sent back to the factory for replacement. RGB pure laser maintains 80% of brightness over 30,000 hours (eight years) of use. 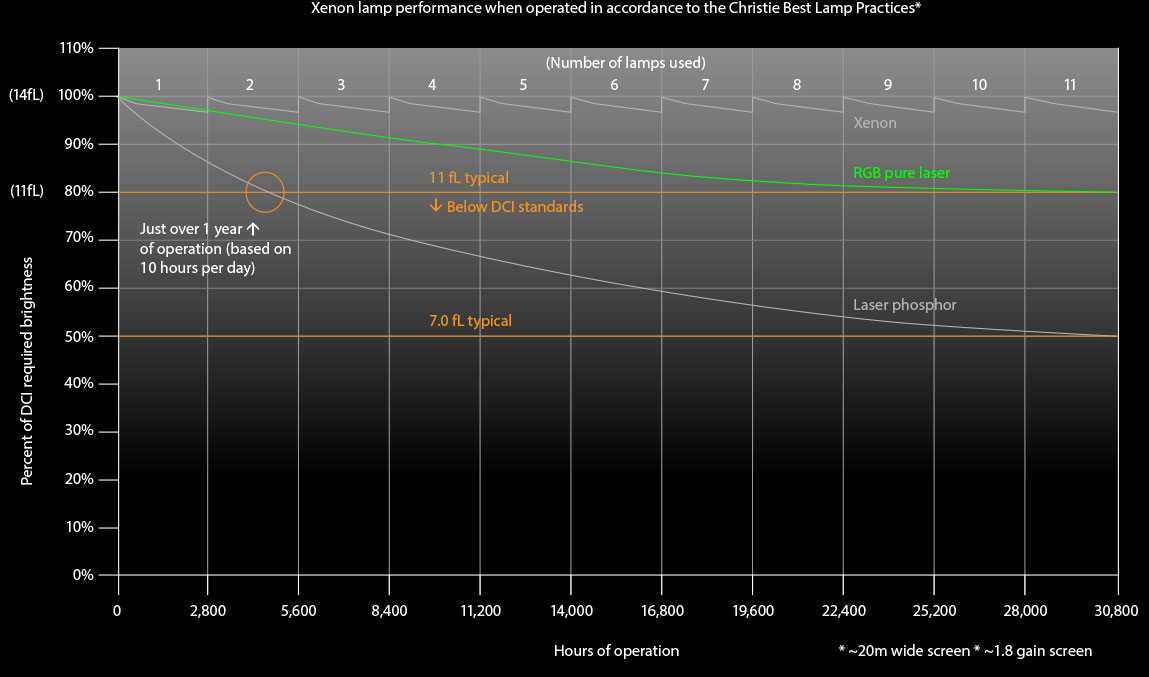 Our sales team is ready to crunch the numbers and help you compare the total cost of ownership between projectors with different illumination platforms. Have a Christie sales manager contact you to calculate the TCO of your next cinema projection purchase.